justmecatholicfaith
This BLOG is teaching about the CATHOLIC FAITH

From Wikipedia, the free encyclopedia

A breviary (from Latin brevis, ‘short’ or ‘concise’) is a liturgical book of the Latin liturgical rites of the Catholic Church containing the public or canonical prayers, hymns, the Psalms, readings, and notations for everyday use, especially by bishops, priests, and deacons in the Divine Office (i.e., at the canonical hours or Liturgy of the Hours, the Christians’ daily prayer). The word can also refer to a collection of Christian orders of prayers and readings, such as contained in Anglican or Lutheran resources. In general, the word breviary may be used to refer to an abridged version of any text or a brief account or summary of some subject, but is primarily used to refer to the Catholic liturgical book.

The volume containing the daily hours of Roman Catholic prayer was published as the Breviarium Romanum (Roman Breviary) until the reforms of Paul VI, when it became known as the Liturgy of the Hours. However, these terms are used interchangeably to refer to the Office in all its forms. This entry deals with the Breviary prior to the changes introduced by Pope Paul VI in 1974.

This word breviary (Lat. Breviarium), signifies in its primary acceptation an abridgment, or a compendium. It is often employed in this sense by Christian authors, e.g. Breviarium fidei, Breviarium in psalmos, Breviarium canonum, Breviarium regularum. In liturgical language Breviary has a special meaning, indicating a book furnishing the regulations for the celebration of Mass or the canonical Office, and may be met with under the titles Breviarium Ecclesiastici Ordinis, or Breviarium Ecclesiæ Rominsæ (Romanæ). In the ninth century Alcuin uses the word to designate an office abridged or simplified for the use of the laity. Prudentius of Troyes, about the same period, composed a Breviarium Psalterii (v. inf. V. HISTORY). In an ancient inventory occurs Breviarium Antiphonarii, meaning “Extracts from the Antiphonary”. In the “Vita Aldrici” occurs “sicut in plenariis et breviariis Ecclesiæ ejusdem continentur”. Again, in the inventories in the catalogues, such notes as these may be met with: “Sunt et duo cursinarii et tres benedictionales Libri; ex his unus habet obsequium mortuorum et unus Breviarius”, or, “Præter Breviarium quoddam quod usque ad festivitatem S. Joannis Baptistæ retinebunt”, etc. Monte Cassino about A.D. 1100 obtained a book titled “Incipit Breviarium sive Ordo Officiorum per totam anni decursionem”.

From such references, and from others of a like nature, Quesnel gathers that by the word Breviarium was at first designated a book furnishing the rubrics, a sort of Ordo. The title Breviary, as we employ it – that is, a book containing the entire canonical office – appears to date from the eleventh century.

St. Gregory VII having, indeed, abridged the order of prayers, and having simplified the Liturgy as performed at the Roman Court, this abridgment received the name of Breviary, which was suitable, since, according to the etymology of the word, it was an abridgment. The name has been extended to books which contain in one volume, or at least in one work, liturgical books of different kinds, such as the Psalter, the Antiphonary, the Responsoriary, the Lectionary, etc. In this connection it may be pointed out that in this sense the word, as it is used nowadays, is illogical; it should be named a Plenarium rather than a Breviarium, since, liturgically speaking, the word Plenarium exactly designates such books as contain several different compilations united under one cover. This is pointed out, however, simply to make still clearer the meaning and origin of the word; and section V will furnish a more detailed explanation of the formation of the Breviary. 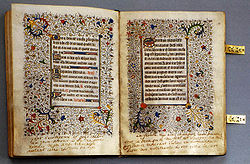 END_OF_DOCUMENT_TOKEN_TO_BE_REPLACED

Posted by justmecatholicfaith in Breviary